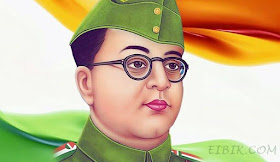 The day of 23, January 1897 is inscribed in the golden letters in world history. On this day, Subhash Chandra Bose, the great hero of the freedom movement, was born to famous lawyer Jankinath of Cuttack and Prabhavatidevi.

His father returned the title of 'Raibahadur' in protest against the repression of the British. This led to bitterness towards the British in Subhash's mind. Now Subhash should take self-determination to drive the British out of India and make India independent.

Subhash resigned from ICS after passing the ICS examination. On this, his father boosted his morale and said- 'When you have already taken the fast of service, do not ever deviate from this path.'


Subhash resigned from his post on 16 March 1939. Subhash started the efforts to organize the youth with full devotion, giving a new path to the freedom movement. It began on 4 July 1943 with the 'Indian Independence Conference' in Singapore.

The 'Azad Hind Fauj' was duly formed on 5 July 1943. On 21 October 1943, Netaji realized his resolve to achieve independence by organizing a group of Indians living in different countries of Asia and setting up a temporary independent Government of India.

On 12 September 1944, at the Jubilee Hall, Rangoon, on the memorial day of the martyr Yatindra Das, Netaji gave a very poignant speech - 'Now our freedom is certain, but freedom demands sacrifice. You give me blood, I will give you freedom. ' This was the sentence that sprouted among the youth of the country, which is mentioned in the golden letters not only in India but in the history of the world.

On 16 August 1945, Netaji's plane crashed at Taihoku Airport on its way to Tokyo, and the Mother India cherished for ever, immortalized by burning the divine flame of the nation's love.
on May 10, 2020
Share