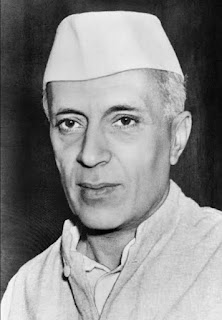 Pandit Jawaharlal Nehru, who was the first Prime Minister of India, was born on 14 November 1889 in Allahabad. His birthday is celebrated as Children's Day. His father's name was Motilal Nehru, who belonged to a wealthy family and his mother's name was Swarooprani. The father was a lawyer by profession. Jawaharlal Nehru was his only son and had 3 daughters. Nehru had great affection and affection for children and he considered children to be the future creators of the country.
Jawaharlal Nehru had the opportunity to get education in the best schools and universities in the world. He did his schooling from Harrow and college from Trinity College, London. He completed his law degree from Cambridge University. Nehruji received the title of Bar-at-Law in 1912, studying at Harrow and Cambridge and was called to the Bar.
Pandit Nehru was influenced by Gandhi from the beginning and joined the Congress in 1912. He is credited with organizing the first peasant front of Pratapgarh in 1920. In 1928, Nehru was wounded in Lucknow in protest against the Simon Commission and was arrested in the Salt Movement of 1930. He spent 6 months in jail. Wrote 'Autobiography' in Almora Jail in 1935. He made a total of 9 prison visits. He went around the world and was recognized as an international hero.
He held the post of Congress President 6 times (Lahore 1929, Lucknow 1936, Faizpur 1937, Delhi 1951, Hyderabad 1953 and Kalyani 1954). In the 'Quit India' movement of 1942, Nehruji was arrested on 9 August 1942 in Bombay and remained in Ahmednagar jail from where he was released on 15 June 1945. Nehru propounded the principle of Panchsheel and in 1954, embellished with 'Bharataratna', Nehru organized and led neutral nations.
Sardar Vallabhbhai Patel and Acharya Kripalani got the most votes when Congress voted for the future Prime Minister when India got independence in 1947. But at the behest of Mahatma Gandhi, both of them withdrew their names and Jawaharlal Nehru was made the Prime Minister. Pandit Jawaharlal Nehru became the first Prime Minister of independent India in 1947. He became the Prime Minister of India in the interim government formed before independence and after independence in 1947 and remained in this post till his death on 27 May 1964.
Nehru could not improve India's relations with Pakistan and China. He also extended a hand of friendship towards China, but in 1962, China invaded with deceit. The invasion of China was a major setback for Jawaharlal Nehru and probably resulted in his death. Jawaharlal Nehru suffered a heart attack on 27 May 1964 in which he died.
'The specific proposal for action to run the fight for freedom and independence was almost unanimously passed. ... The special proposal was accepted by coincidence with the midnight hour injury of 31 December, while the previous year was replacing him with a new year. ' From Nehru's 'Meri Kahani' about the passage of the independence resolution at the Lahore session.
on May 18, 2020
Share